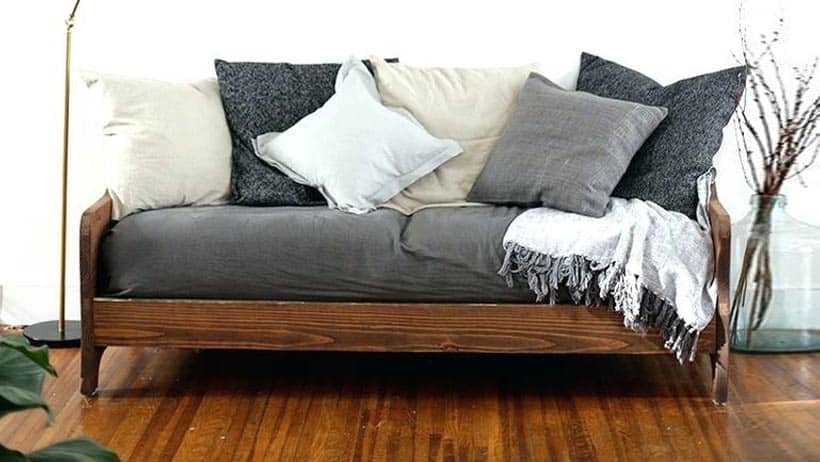 Let’s explore the different options for making a daybed look like a couch. Some of these will be simple hacks which you can apply in seconds while others might be much more difficult. Either way, with each tip, you’ll be moving closer to your goal of making your daybed look and feel more like a couch.

1. Start with the Right Daybed (If Possible)

If you’re still considering which daybed to buy, you’re in luck. The right type of daybed goes a long way towards looking like a couch. Check out our review on the best daybeds for adults.

If you’re buying an upholstered daybed with wide armrests and padded backrest, your work is already halfway done! In fact, by buying the right style, the lines between a daybed and a sleeper couch can be significantly blurred. This can make it look much more at home in the living room and become an inviting piece of furniture that everyone wants to use. Upholstered daybeds look much more like couches than the thin, metal frame daybeds which have become very affordable on Amazon. 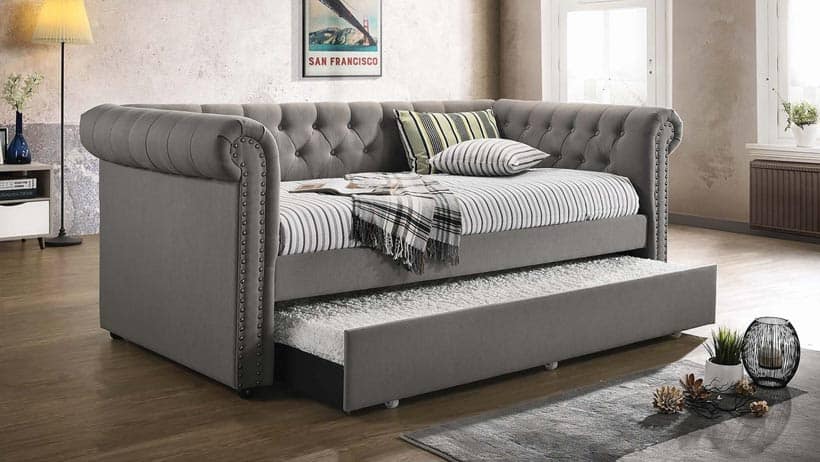 The thick padding not only offers extra cushioning on the back and armrests but the backrest ios also slanted more like a couch’s backrest, giving you a more comfortable seating experience.

At the extreme, if you choose a daybed without arm or backrest, you’ll have a very difficult time to style it like a couch. Structurally, the two are completely different and there will be no way to make them the same unless you start adding extra pieces to the frame. 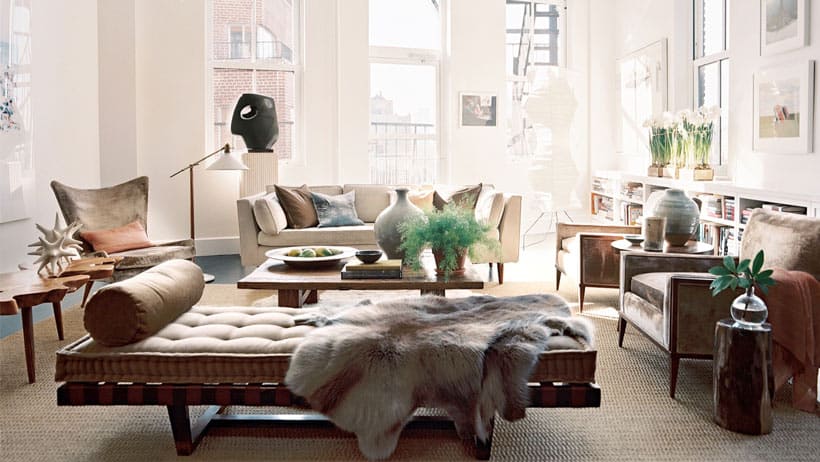 But let’s face it, most of us already have a daybed and we need to do the best we can to make it look like a couch, despite the shortcomings in the existing design.

Here are some great techniques to turn your daybed into a beautiful (and supremely comfortable) couch.

This clever invention is designed specifically as a comfortable backrest.

The average couch backrest slopes back by about 15 degrees. This makes it much easier to sit back and relax while the weight of your upper body is supported more evenly rather than by your hips alone. This small change makes a huge difference in the look and comfort.

If your daybed has a vertical backrest, (or none at all) you could pad it with large cushions OR you could consider the next step, a triangular daybed pillow… 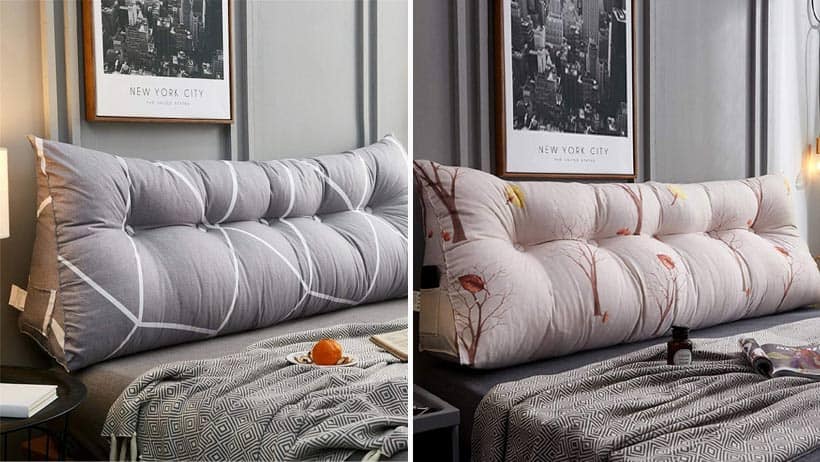 The pillow automatically creates the desired seating angle for a comfortable backrest, similar to that of a couch. Furthermore, it’s easily available in hundreds of styles and colors on Amazon.

Daybeds usually have narrow armrests. This not only makes them more uncomfortable to rest your arm on but it really is one of the key visual differences between a daybed and a couch.

It might not look like a big issue at first, but once you’ve used the daybed for a while, it’ll be painfully obvious, not to mention uncomfortable. 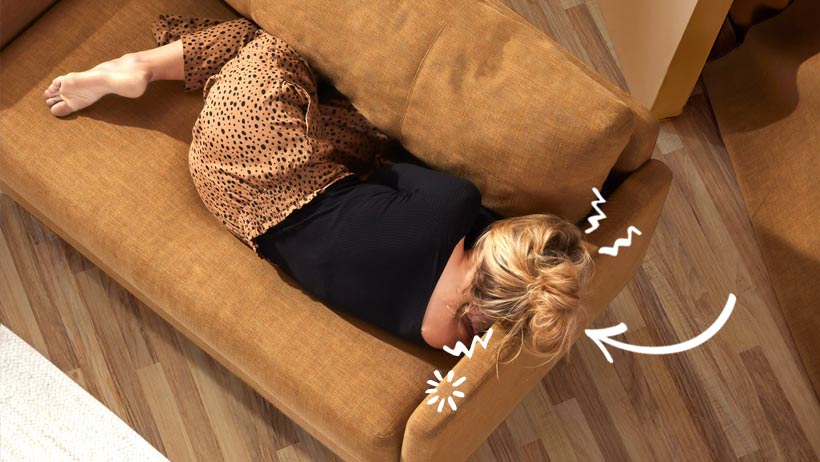 Couches usually have much wider armrests than daybeds. This makes them more ergonomically comfortable and helps you relax your shoulders while seated.

If your daybed has thin armrests, you could consider adding loads of pillows to the sides, “building up” a soft armrest layer by layer. 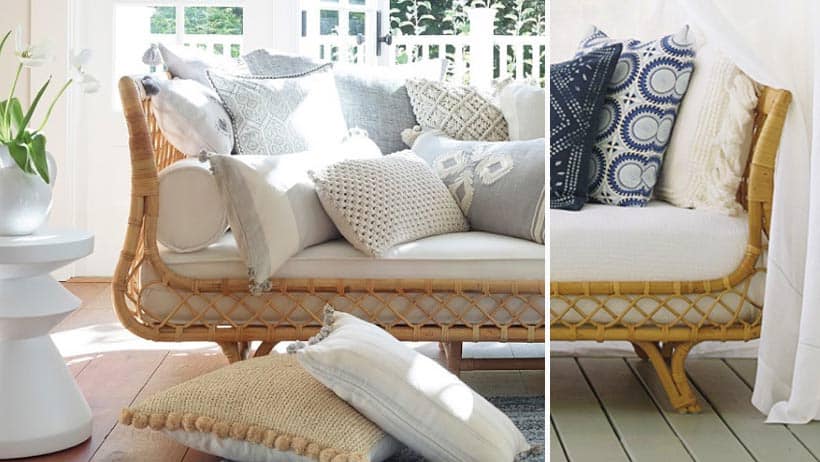 This will make a huge difference both visually and for comfort.

You could add some throw pillows which prop up against the side of the armrests, allowing some overlap onto the part where your arms rest. This isn’t always enough though and you may need to hang an extra throw blanket over each armrest for additional padding. It will also help “frame” the daybed more lie a couch visually.

A clever solution is to add “bolster pillows” inside the armrests (or where the armrests should be) so that you can rest your arms more comfortably on the sides just like a couch. 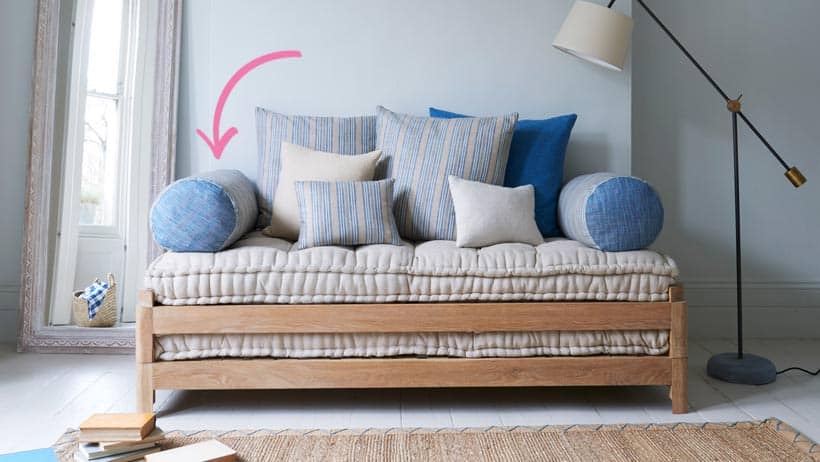 The importance of side table cannot be overstated. It’s one of the most overlooked pieces of furniture, especially when it comes to daybeds. 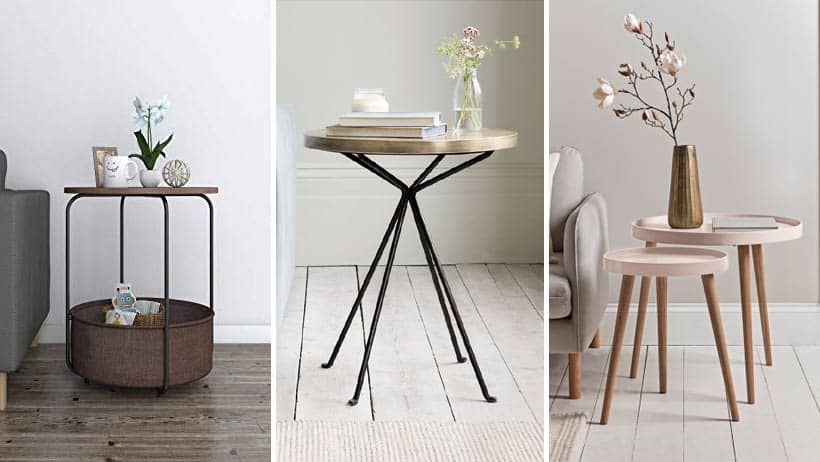 You’ll feel more at ease placing drinks, magazines or your cellphone down without having to stretch to the floor or a nearby coffee table.

Most of all, side tables will act as a visual frame, emphasizing the daybed between them as a welcoming seating area, where you can relax and unwind.

An important thing to remember, especially with daybeds, is that decor is essential. Balance is important in interior design. You can add a large lamp in big spaces or little plant in smaller areas. 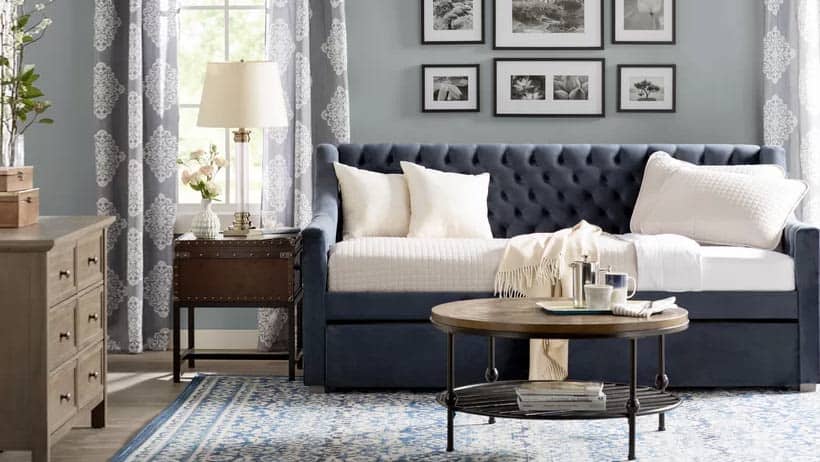 Without any decoration, a daybed can look bare and out of place. Unless stark and open is the look you’re going for, you’ll want to warm up the area with complementary furniture and decor. That being said, even a stark look usually requires some creative extras to finish it off. 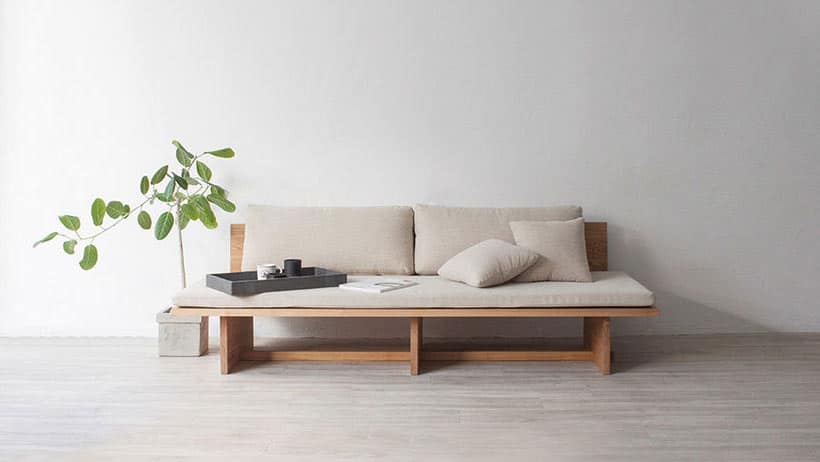 The seat depth of an average couch is around 22 inches but a twin daybed mattress is 39 inches wide. That means you’ll need to shorten the seat length by around 17 inches using very large backrest cushions. If you don’t, you may end up placing pressure on the back of your legs while your feet are left dangling off the floor. Remember, the cushion will need to be this large, even when compressed. You might want to double up with a second layer of cushioning at the back for extra thickness.

Couch seats should have around 5% downward slope from the front to the back (ref). This supports the lower part of your thighs (below your hamstring) and helps to “prop” you up on the couch.

If this slope is missing you’ll keep feeling like you’re sliding down.

Unfortunately, daybeds are also designed to sleep on and have zero slope angle. This is explored more in-depth in our article: Are daybeds comfortable to sleep and sit on?

If you’ll be using the daybed as a couch and intend to never really sleep on it, you could artificially create this slope in the following ways:

Of course, any of these will make it much harder to sleep on and you will lose the dual-purpose ability of the daybed. That’s why these are pretty extreme and should only be done if you’re ok not to sleep on the daybed again.

But, even if you do plan on sleeping on the daybed, there should at least be some sort of elevation in the front which can be achieved by some clever placement of throw pillows.