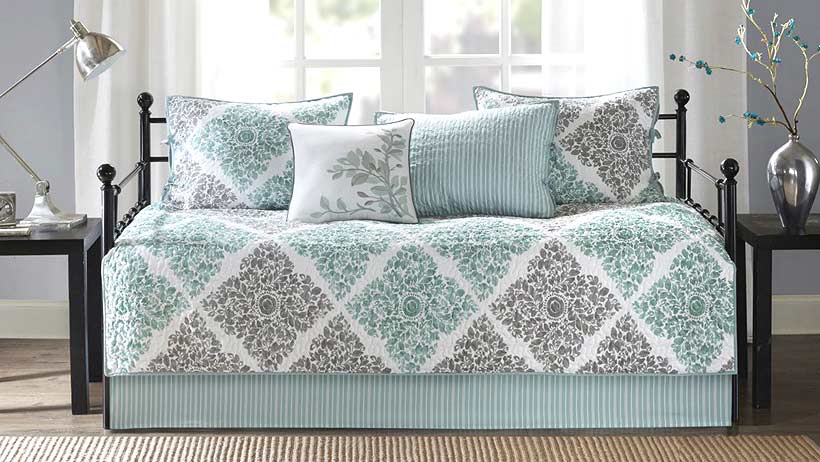 Personally I’ve never been 100% sure of this so I decided to dig deep into the pros and cons of using special daybed bedding vs normal bedding on my daybed. This is what I found…

There are a few caveats though…

In this article, we’ll explore all the reasons why you’d want special bedding as well as a few reasons why it might be better to go with normal bedding. Also check out our suggestions for the best daybed bedding sets including some unique ideas and inspiration.

What is a Daybed Set? 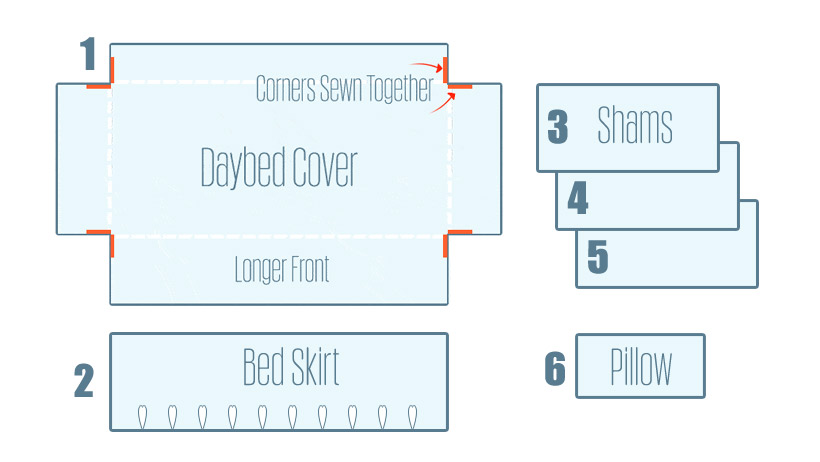 The Difference Between Daybed Bedding Sets and  Regular bedding Sets

This can seem a little confusing, so let’s look at each difference in more detail. 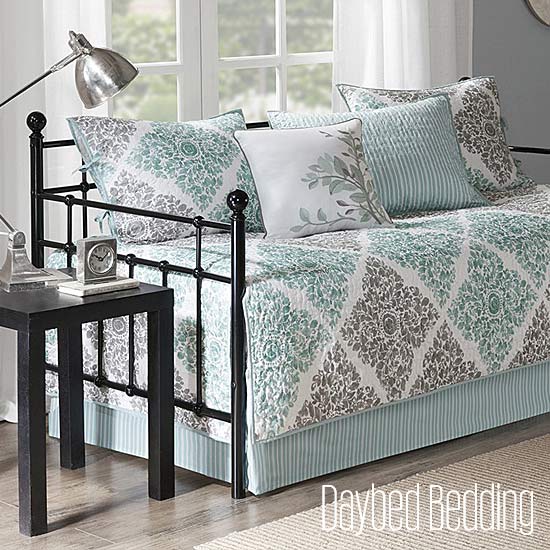 The cover (or daybed comforter) has been specifically designed for a daybed. This means it has short flaps that tuck on the sides and back of the daybed and an extra-long drop that drapes down the front of the daybed. (In a regular bedding set, the cover is simply rectangular and has no slits, corners or overhangs.)

Sometimes the corners are even sewn-in to keep the daybed cover in place, even when being sat on regularly. This is very helpful as a normal comforter will tend to move around a lot making it a real pain to keep neat.

A daybed skirt is the same length all around, just like a regular bed skirt, but there’s a big difference you’ll need to check out for…

On a special daybed bed skirt, there are slits in the corners to accommodate the daybed frame. (This isn’t always the case on normal bed skirts, especially the “ruffled” type.)

If you’re buying a special daybed set, you’ll be fine. But if you’re buying a bed skirt separately for your daybed, you must check that the corners are split or you’ll end up having to cut them yourself to allow for the back and armrests of the daybed. (source)

Putting a Twin Bed Cover on A Daybed Creates Problems

Can you use a twin quilt on a daybed? Firstly, a regular twin quilt or comforter will tend to move around more than a special daybed cover since there arent any corners sewn in to hold the comforter in place. To keep it looking neat, you’ll have to make up the daybed every time someone sits on it. 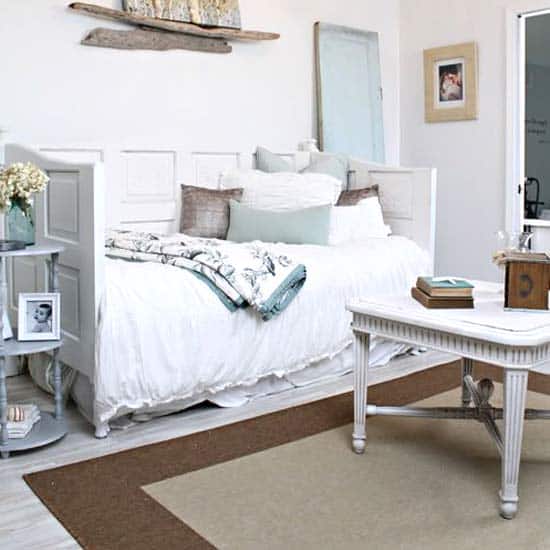 Secondly, because there are no slits cut out, the corners of the comforter will bunch up and drape sideways in front of the daybed. 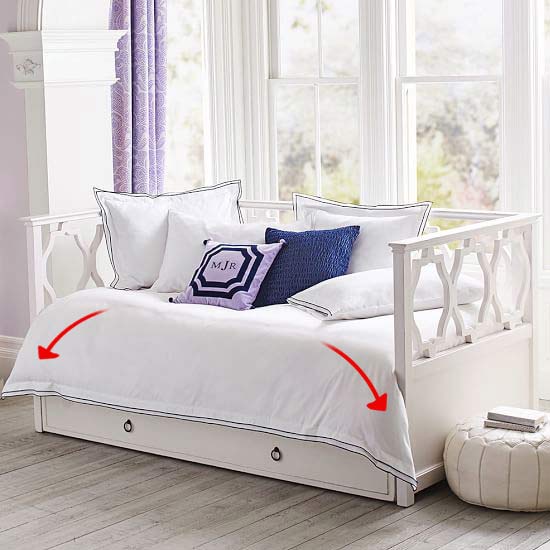 One possible solution for this is to get a cover that’s about the same height as the mattress is long. (75 inches for a regular twin) That way the cover will “drape” in-line with the daybed mattress and it might look a little neater. 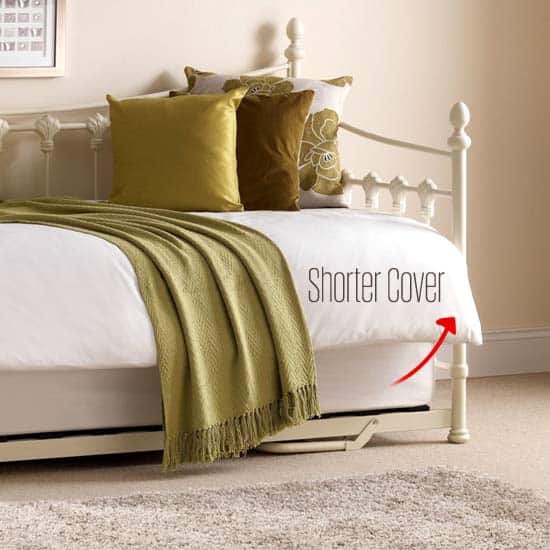 Another option is to tuck the entire cover under the mattress all the way around. You lose the front drop but it looks a little neater. 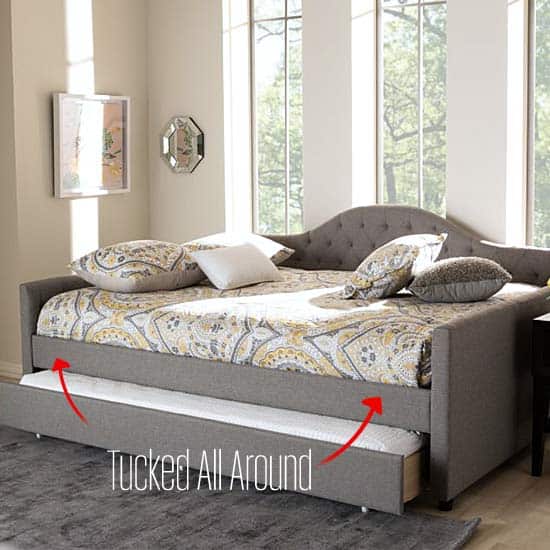 There also won’t be a nice long drop in front of the daybed (unless you pull the comforter more to the front).

Either way, the front can be a real problem, but the problem is still just visual.

It’s in the back that the real issue occurs…

The corners of the comforter bunching up in the back and on the sides will make it harder to tuck them in behind the daybed mattress.

You would have to lift the mattress and tuck the comforter in under it, all while standing on the opposite side of the bed!

It will be hard for an adult, but nearly impossible for a child to do.

When is Regular Bedding Preferred on a Daybed?

Ok, so we’ve discussed all the ways in which special daybed bedding is better for a daybed than a regular bedding & comforter set.

It’s when you’ll be using the daybed more for sleeping than for sitting on.

If the daybed is a “sleeping” bed that gets used almost every day for sleeping on, you can actually make it up as a bed, instead of a daybed/couch.

Even though a daybed comforter set fits the daybed perfectly only in “couch” mode, if you’re planning on sleeping on the daybed regularly, you might consider a traditional twin comforter which works better for “bed” mode.

The thing is, the comforter wraps around all 4 edges of the daybed mattress at different lengths and this can be somewhat annoying when you’re sleeping on the daybed and the overhanging “flaps” are uneven.

The longer overhang/drop on the front side of the daybed also tends to pull to the one side when your sleeping.

There will be another shorter flap by your face with weird corners by your shoulders.

It just doesn’t always make the most sense.

In this case (where the daybed is intended to be a bed that occasionally, maybe gets used as couch) you can strongly consider regular bedding instead of specialized daybed bedding! 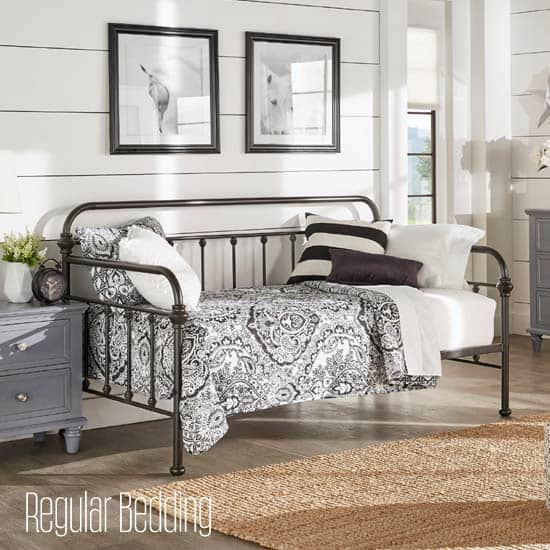 Daybed bedding is designed with slits and overhangs to fit daybeds perfectly. Sure, you can use twin bedding on a standard twin daybed but the comforter will bunch at the corners and will require regular adjustment as it moves around.

Special daybed bedding works great for daybeds which will be sat on more often than slept on. However, if the daybed is used more for sleeping on, traditional twin bedding actually works better.